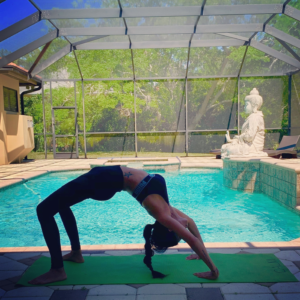 Gorgeous greens and blues…
Seen from upside down views.

Yoga literally means “union.”
The Y in yoga, comes from the Sanskrit word “yogah,” which means to yoke or unite.
The O in yoga represents the Hindu mantra and universal symbol Om, used while meditating.
The G in yoga represents the guru, or teacher. Swami Vivekananda and Paramahansa Yogananda were pioneering fathers of yoga in the western world.
The A in yoga stands for asana, or body postures.

Yoga is a powerful spiritual, mental, and physical discipline, that originated in India thousands of years ago.
There are many paths of yoga such as karma, bhakti, jnana, and raja. Yoga was introduced to the West about 100 years ago.

“You realize that all along there was something tremendous within you, and you did not know it.”